Turin – 18 April 2018 | The Fondazione Spinola Banna per l’Arte presented an experimental and site-specific intervention for the redevelopment of a building on the outskirts of Turin: a project that in a single work declines various mutually correlated art forms (visual, sound and web), thanks to the common intent of the artist Giuseppe Caccavale (Afragola, Naples, 1960) and of the composer Stefano Gervasoni (Bergamo, 1962).
The project originates in 2016 following an invitation from the General Directorate of Contemporary Art and Architecture and Urban Outskirts of the MiBACT, which proposed to the Promotion Committee for the Italian Contemporary Arts Foundations – of which the Fondazione is a member – to come up with and implement an artistic and cultural project aimed at the valorisation of the outlying urban areas.
The Fondazione, committed to supporting young talent in the visual arts and in music, began to head a special commission which in little more than a year, led to the implementation of a visual-sound work providing the artistic reconversion of the outside wall of a building, belonging to the Metropolitan City of Turin, which houses the Primo Liceo Artistico Statale (First State Artistic Lyceum) of Turin.
The work, entitled Segni per la speranza, is a majestic mural endowed with a sophisticated interactive web sound installation. As well as the two artists of international standing and the computer music designer Marco Liuni (IRCAM, Paris), the creation process also drew on the collaboration of prestigious sources of excellence from the territory such as the Degree Course in Conservation and Restoration of Cultural Heritage (University of Turin and Centre for the Conservation and Restoration of Cultural Heritage, ‘La Venaria Reale’ Foundation), Turin Polytechnic and the State Music Conservatory ‘Giuseppe Verdi’ of Turin.

The project has a strong multidisciplinary nature, and it aims to promote the creation of an innovative work, with a profound social meaning to it, making it possible to foster a civic sense and at the same time to develop a sensitivity towards beauty.

For the creation of the visual project, as well as his collaborators Timothée Chalazonitis and Clément Valette, Giuseppe Caccavale involved 50 students from the Primo Liceo Artistico of Turin as part of the school’s work experience programme. Through a careful choice of colours used for the city of Turin, the mural depicts the texts elaborated by the students involved in the worksite, from their reading of books, from their investigations and research in the field of graphic design, along with the viewing of films chosen for the occasion as visual documents. The sentences selected were then translated into the languages of the nations of origin of the students most representative of the institute: French, Chinese and Russian. The Centre for the Conservation and Restoration of Cultural Heritage ‘La Venaria Reale’ intervened during the operative phase to guarantee the protection and conservation of the wall surface.

The interactive Soundwork, Web Wall Whisper – www now accessible online via , www.webwallwhispers.net, is reachable both from PCs and mobile devices. It was designed by Stefano Gervasoni and Marco Liuni, in collaboration with the Turin Polytechnic, the ‘Giuseppe Verdi’ State Music Conservatory of Turin, thanks to the work of the young students Francesco Cretti and Luca Morino: an audio-visual web application arising from the dialogue between musical composition, experience design and programming. The work will be accessible from anywhere via PC and mobile devices: the virtual visitor may visually explore the mural on various levels of depth, thus generating a unique musical composition every time, an itinerary of audio-visual exploration that traces documentary images in high resolution and places them in relation to the music of Stefano Gervasoni, the texts of the mural recited by the students, the dialogues and the sounds recorded during the creation of the mural itself and their reciprocal fusions, created using electronic techniques. The user may thus enjoy the work in visual and/or audio terms, offering a unique multimodal experience.
With Segni per la speranza, the Fondazione Spinola Banna per l’Arte stands out for the foresight with which it managed to respond to the MiBACT proposal, coordinating an inclusive, choral project bringing together private and public institutions, both cross-disciplinary and transversal, also from the generational point of view of the participants. 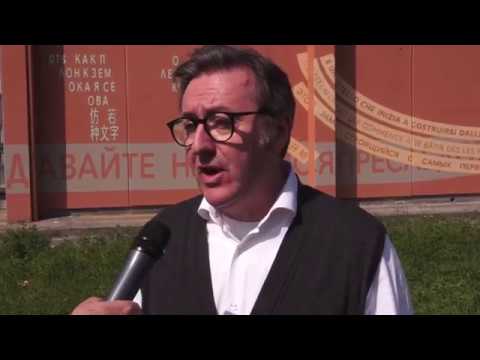